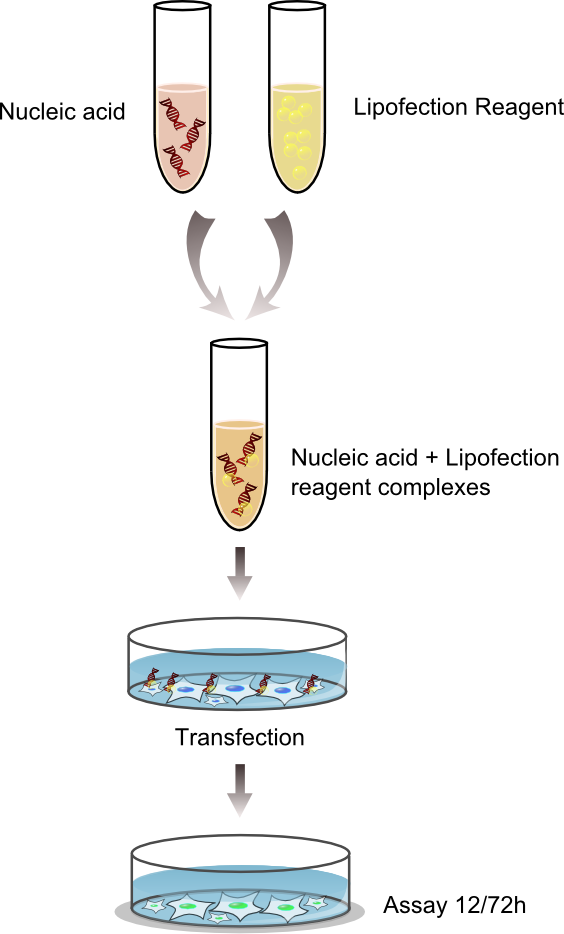 Lipofection is a lipid-based transfection technology which belongs to biochemical methods including also polymers, DEAE dextran and calcium phosphate.

Lipofection principle is to associate nucleic acids with cationic lipid formulation. The resulting molecular complexes, known as lipoplexes, are then taken up by the cells.

The main advantages of lipofection are its high efficiency, its ability to transfect all types of nucleic acids in a wide range of cell types, its ease of use, reproducibility and low toxicity. In addition this method is suitable for all transfection applications (transient, stable, co-transfection, reverse, sequential or multiple transfections…), high throughput screening assay and has also shown good efficiency in some in vivo models.

HOW DOES IT WORK?

The lipid-based reagents used for lipofection are generally composed of synthetic cationic lipids that are often mixed with helper lipids such as      DOPE (1,2-dioleoyl-phosphatidyl-ethanolamine) or cholesterol. These lipids mixture assembles in liposomes or micelles with an overall positive charge at physiological pH and are able to form complexes (lipoplexes) with negatively charged nucleic acids through electrostatics interactions. The association of the lipid-based transfection reagent with nucleic acids results in a tight compaction and protection of the nucleic acids and these cationic complexes are mainly internalized by endocytosis.

Once inside the cells two mechanisms leading to the nucleic acids release into the cytoplasm have been described. One relies on the endosomes buffering capacity of the polycationic residues (called “proton sponge effect”). The other describes the ability of cellular negatively charged lipids to neutralize the cationic residues of the transfection reagent leading to destabilization of endosomal membranes.

Finally, the cellular and molecular events leading to the nuclear uptake of DNA (not required for siRNA) following by gene expression remain highly speculative. However, the significance of cell division on transfection efficiency favours the assumption that nuclear membrane disruption during the mitosis process promote DNA nuclear uptake. Nonetheless, transfections of primary cells (non-dividing) and in vivo are also achievable with lipofection demonstrating that DNA can make its way to the nucleus where gene expression takes place.

The cationic lipids (lipoplexes) and polymers (polyplexes) are the most employed non-viral gene delivery systems. The Tee-Technology (Triggered Endosomal Escape) combines and exploits the properties of both entities to achieve extremely efficient nucleic acids delivery into cells. Indeed, this new generation of lipopolyamines contains a lipophilic part, such as lipids, and a charged polyamine moiety, such as cationic polymers. These moieties act in synergy to ensure a tight nucleic acids compaction and protection and a very efficient destabilization of the endosomal membrane which allows the release of large nucleic acids amounts in the cytosol and DNA nuclear uptake. A particular focus on the synthesis of fully biodegradable entities was integrated. In this way, the transfection reagents do not interfere with cellular mechanisms, high cell viability is maintained in every experiment and any potential secondary effects are avoided.

WHAT ARE THE APPLICATIONS?

DreamFect™ Transfection reagent: for all nucleic acids, for all cells including suspension cell lines

The major Tee-Technology advantages are:

HOW DO I USE LIPOFECTION REAGENTS?

The protocol is a very straightforward and easy procedure:

1. Prepare the DNA and the Reagent solutions.

2. Mix them together and incubate 20 min.